You will receive a password reset email notification via email

According to the development of the numerical analysis technique, an analysis of complicated structures such as ships, cars, airplanes became possible.
However accurate modeling of those complicated structures is not easy because it is difficult to model connecting parts between substructures.
Complicated system is divided into several substructures to analyze, then substructure models are synthesized to predict dynamic properties of whole system.
The techniques dealing with this type of problems are usually referred to as the more efficient method to calculate the response of the linear system.
THE Hybrid CAE/CAT technique can predict the responses of the whole structure using the FBS method and the analysis results of finite element method high confidence.

The FRF Based Substructuring predicts the dynamic properties of an assembly using the information of a each component dynamic properties.
When substructures are coupled, force equilibrium and compatibility conditions are satisfied.
The connection properties of a joint should be considered on the substructure interface.
The compatibility condition is that the displacement of each substructures should be correspond with that of assembly.
The force equilibrium condition is that the sum of applying forces at the substructures should be correspond with the applying force at the assembly.
From these conditions, we can derive the FBS algorithm. 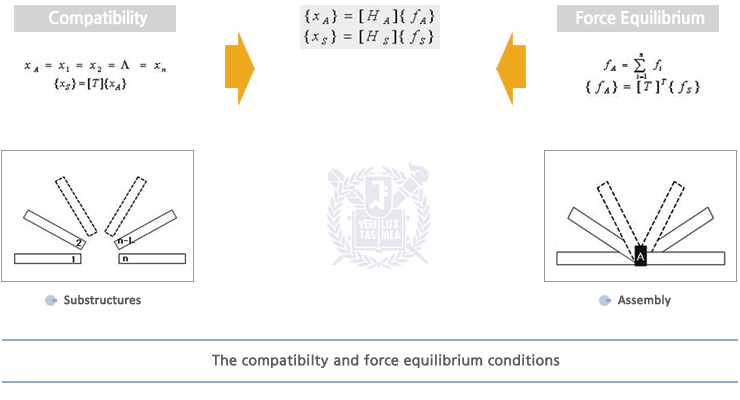 The FRF Based Substructuring method and the Transfer Path Analysis were applied to the prediction of operational interior noise in passenger vehicle system.
The hybrid CAE/CAT technique was widely applied to product development in various fields since this technique can predict the response of the whole system when a part of the system is changed.
Especially, the technique is very useful to predict the vehicle dynamic properties in case of changing some parts of the vehicle.
Target parts can be established on the basis of experimental models and FE models of the prototype constructed in the lanning stage of the vehicle development.
First, the rest based FBS method was applied to the vehicle body and subframe.
Then the experimental model was replaced with FE model to apply the hybrid FBS method.
When the FBS method was applied, the connection property of substructures was considered.
The vibro-acoustic transfer function was predicted with hybrid FBS model.
This predicted vibro-acoustic transfer function were applied to experimental TPA to predict operational interior noise in vehicle system. Like this way NVH(Noise, Vibration, Harshness) optimization in the planning stage of vehicle development becomes possible.

The Application Process of The Hybrid CAE/CAT Technique 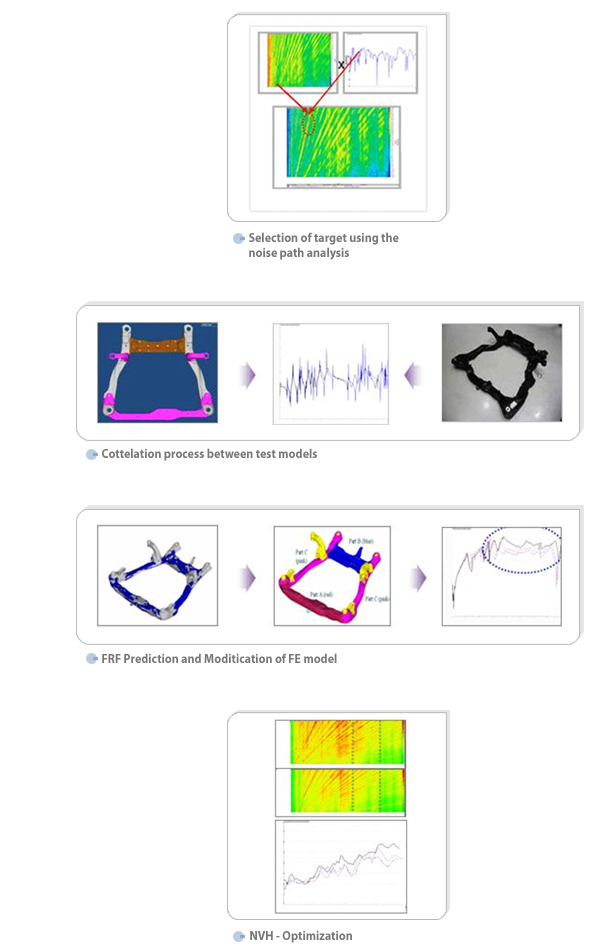